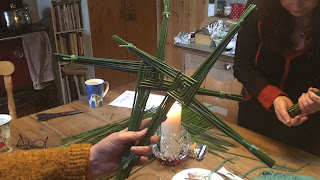 Imbolc, part 1 - Brighid Tales
flame, hearth, oaks & Brighid's journey to Cill Dara
With the modern setting of the Gregorian Calender, Brighid's Eve is on 31st January, & Brighid's Day is celebrated during1st February. As these dates are so accepted now, very few people question how and why these dates were used as Brighid celebration days.
Brighid who became St. Brighid, was born about 1100 before there was a Gregorian Calendar. The Julian Calendar was the accepted calendar system of her time. Even when Brighid was recognised as St. Brighid, that was about 300 years before the Gregorian calendar.
Through this Nature Folklore session, we will focus on St. Brighid as the founder of the Cille Dara monastery, and some of the culture within her life that guided her there. We will explore the popular and very widely accepted stories, thoughts, prayers, intentions, ceremony, rituals used for revering St. Brighid of Kildare. We will also explore Faughert, Ardagh, and lesser known settings of Brighid's journey
I will also cover the wonderful background story of the Dara, Oak, symbolism.
Also Important is to include are her trinity of skills of healing, smithing, and poetry. Of course we need to add the 'flame', and 'hearth' associated with her, and a wee bit on her cows and milk. Included will be a bit on Brighid Crosses and Brideog Dolls too.
We will touch on Brighid's springs, wells, water bearing, and births, and also her links to brewing ... but really those topics will mainly be held over for the following Nature Folklore session of Imbolc Traditions, next Sunday, part 2.
Please offer to share your thoughts and practices of Brighid Day, and a poem or story, as a guest presenting your inspirations. You can be live on the show or send me pre-recorded video or audio. Please message me.
Please support the continuation of Nature Folklore sessions ...
These Nature Folklore sessions on Sundays are made possible through the kind subscriptions of our Patreon subscribers that help to pay for monthly production services and subscription costs
Subscribing with a euro, dollar, or pound, or more, per month also includes subscriber access to my exclusive short videos and eventual course in return ...
Please subscribe to Nature Folklore through Patreon, as a Patron

If you are not comfortable subscribing through Patreon, please consider a donation into our Tip Jar via PayPal. PayPal account is not needed. Using any card will work. Thank you.

Donations of €10, £9, $12, or more will currently bring you the same benefits as a Patreon Subscription, thank you.
.

Popular posts from this blog 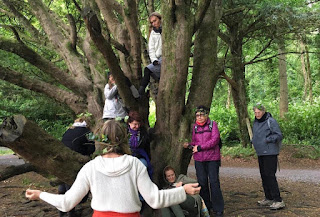 Click the 'shows schedule' link, to see our calendar, including what's on next Sunday . Thank you for your support of Nature Folklore that went online as Sunday Sessions from March 2020 due to coronavirus prevention practices.
Read more 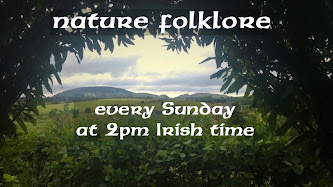 Next Nature Folklore Sessions Live - Sunday 9th January at 2pm Irish Time Watch here Live! ... or watch the archive later (click pic to set reminder) Divination With Water a focus on hydromancy, and other water divination   Divination seems to be our attempts to gain clearer insight to the pathways created by our questions. A kind of trying to find 'the spoilers' to display where our life's story is going. Some diviners may say this 'craft' is actually our wise mapping out of our story unravelling. We usually use Divination as a tool for problem solving and decision making. It seems to be a popular thing many of us do through January alongside our dieting, operation transformations, habit controlling, getting our second garden seed order in, and assessing our garden and DIY tools.   So through this Nature Folklore session we will explore some stories of water pool divination, oracles and seers, and if we have time widen the subject to incl
Read more